Where is it? Just a couple of blocks from colourful Chinatown and a five-minute cab ride from Boat Quay, the 367-room Parkroyal on Pickering, which opened in 2013, has one of the best locations in Singapore outside Marina Bay. Although nothing is very far from anything else in the Lion City, being within walking distance of the best nightlife, restaurants and shopping – and just a few minutes from the buzzing business centre – is a plus.

What’s the big deal? This property is an architectural stunner. Its imposing exterior was built in an undulating, wave-like pattern in alternate shades of grey to evoke a Balinese rice terrace, and the “hotel inside a garden” concept inspired the creation of 15,000 square metres of cascading foliage, sky gardens (below), waterfalls and wall planters throughout the property. The back-to-nature theme is continued in the lobby, with its natural wood elements, water features and moss-inspired carpets. 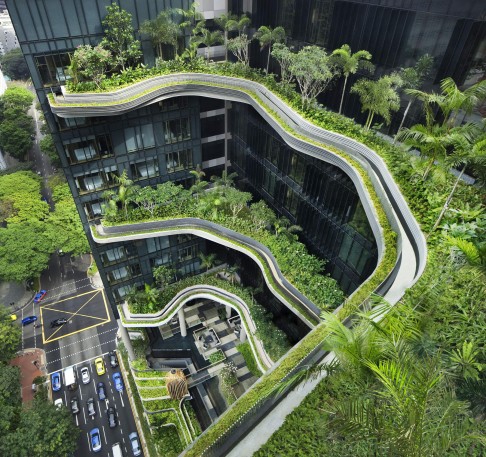 So how “green” is it? The hotel takes its eco-friendly ethos seriously, and has been recognised for its efforts with several awards, including the Green Mark Platinum Award; the highest given by the Singaporean government. Measures and gadgetry to help conserve resources in the 16-storey property include a rain harvesting and water recycling programme; heat pumps to generate hot water; open-air guest corridors; LED light bulbs and movement sensors; energy-efficient air-conditioning; and solar panels on the roof.

Are the rooms as impressive? It depends on your style. If big, luxurious bathtubs and plush upholstery are what you’re into – sorry, keep walking. The designs are minimalistic, with an emphasis on natural colours and textures: mossy headboards and light wood furniture, for instance. Smart and simple, the rooms (below) seem to have been designed with the business traveller in mind. And while those attractive floor-to-ceiling windows overlooking the city may keep you from using too much electricity, unless you like to put it all out there, you’ll want to be a little cautious when showering and changing. (Can you still be arrested for inadvertent exhibitionism in Singapore?) 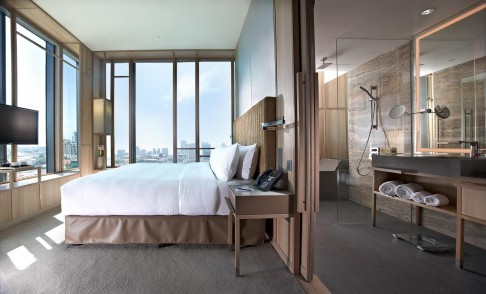 What else is there to do? One of the most striking aspects of the hotel is the fifth-floor wellness centre, where a glass-fronted gym (top) overlooks an infinity pool upon which float brightly coloured, birdcage-shaped pods that can comfortably accommodate four or five (svelte) people. Another unique feature is a 300-metre nature trail, lined with lush gardens and waterfalls, that runs around the hotel. All that splashing and strolling might leave you yearning for one of the St Gregory Spa’s holistic, all-natural treatments.

And you said business travellers are especially welcome, correct? Yes, particularly on the second floor, where there’s ample meeting space and several private work pods – each equipped with a laptop. The Orchid Club Lounge is also a quiet place in which to get work done in the afternoon, with coffee and tea served all day alongside the dramatic 360-degree views (which, on second thoughts, may not be so good for the concentration).

What is there to do nearby? The area comes alive at night. Just across the street you’ll find classic tipples and a low-key American atmosphere at one of Singapore’s most popular “hidden” gems, 28 Hongkong Street; down the road, on Club Street, exquisite Japanese cocktails are crafted at newcomer D.Bespoke; and wildly embellished drinks and blasting tunes should make for an energetic night out at Bitters & Love.

Anything we should know about Singapore? Even if you’re not passing through the city on business, now is a fantastic time to go. This year, Singapore celebrates its 50th birthday, and the nation state is out to party in a big way, with a year-long line-up of events. Mark your calendar for the November grand opening of the National Gallery, a Jubilee Walk around historic and civic locations (also in November) and an extra special Singapore International Festival of the Arts (August 6 – September 20).